Masks are key components for further miniaturization in micro and nanoelectronics. A ground-breaking technology to produce them sent more than 262,000 individually controllable electron beams through a “pinhole”.

These days, true size can be seen under the microscope. That applies at least in the areas of nano and microelectronics, which supplies us with increasingly smaller, faster, and more powerful chips for smartphones and other electronic devices. However, further miniaturization is no longer possible with conventional production technologies.

After all, even mask production has reached its limits. Masks transfer the micro to nanometer sized chip structures on to a photoresist-coated silicon wafer using lithography processes. The areas of the resist that have not hardened are then removed and the silicon at the exposed areas is processed. When the “hard” part has been removed, the procedure starts all over again – up to seventy times. Different masks direct the light specifically to where the photoresist is supposed to harden.

With feature sizes (technology nodes) of less than 10nm, EUV (extreme ultra violet) lithography with a wavelength of just 13.5 nm entered the field several year ago. And from then on, the corresponding masks were produced with electron beam mask writers.

However, high densities of complex geometrical structures cause data volumes to get out of hand and require long writing times. For example, electron single-beam mask writers would need several days for one EUV mask.

This is done much faster with multi-beam mask writers (MBMW) from Vienna-based IMS Nanofabrication GmbH and Fraunhofer ISIT, for which Martin Witt, Dr. Jacqueline Atanelov, and Michael Kampmann received the Joseph-von-Fraunhofer Prize. 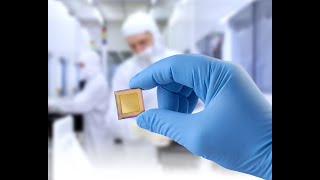 The heart of the mask writer is the TROM2 chip—an electronically controllable “pinhole” processed by MEMS (microelectromechanical system) technology for 512 times 512 (262,144) electron beams. The CMOS electronics with signal processing and combinational logic combined with the MEMS design can deflect each single electron beam individually.

With more than 262,000 electron beams working simultaneously, the electron multi-beam mask writer can transfer even the most complex structures on to photomasks for 14 nm and 10 nm feature sizes and on to high resolution EUV masks for 7 nm and 5 nm feature sizes in just a few hours.

The first multi-beam mask writer, MBMW-101, was used for 7 nm technology nodes in 2017. The latest generation—MBMW-201—has been used in the factories of large semiconductor producers for production of 5 nm chips since 2019. Even 3 nm, which will likely be commercially relevant from 2022, can be achieved.

Currently, the TROM3 chip is being developed. It will be used in future MBMW-301 devices and will enable the next giant leap beyond 3 nm in semiconductor technology. MBMW-301 devices will then satisfy the demands of EUV lithography for higher resolutions to the end of this decade and beyond.