“Resistant” components for the electronics of the future

Over decades, the basic construction of microelectronics and the materials used have remained practically unchanged. Molecular memristors now merge memory and processor for faster and more energy-efficient computers.

Conventional CMOS circuits with spatially separated data processing and storage are increasingly incapable of further boosting their performance. For this reason, researchers around the world are on the lookout for new materials and architectures for the electronics of the future. An important role is played by memristors—a portmanteau of memory and resistor.

The two-pole component has an electrical resistance between its two connections that varies depending on the amount and direction of the applied voltage. At the same time, it depends on its value in the past and is retained when the power supply is switched off. Thanks to these properties, a single memristor can replace several connected transistors that map a logical function.

But that’s not all – far from it. Memristors are able to overcome the von Neumann bottleneck (bottleneck between processor and memory) since data processing and storage take place in one place. And because they behave to voltage impulses in a similar way to synapses reacting to nerve impulses, they could be the long-sought building blocks that make it possible to replicate the brain. So, it stands to reason that they also cut a good figure in machine learning, in artificial neural networks and in neuromorphic computing. The development of industry-standard technologies for the production of the exciting two-port components alone continues to cause difficulties.

For example, when developing memristive systems, Fraunhofer ENAS relies on the perovskite solar cell material bismuth ferrite (BiFeO3), while molybdenum disulfide (MoS2) serves as the basis for the atom-thin “atomristors” at the University of Texas in Austin.

The scientists at the National University of Singapore (NUS) are pursuing a different approach. They are developing a molecular memristor with highly unusual properties. 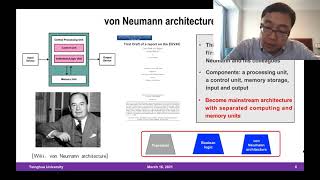 In contrast to conventional memristors, the molecule can be switched between not just two, but between five different states. And for these five circuits, there are eight different transitions. This results in complex logics, even at a molecular level.

Since the charge and electron distribution provides information about past states and several input signals determine the output signal, memristor molecules can map complete decision trees and typical logical functions such as AND, OR or XOR. There is also no external storage in registers, since the status memory is essentially part of the component.

The NUS scientists used the molecular memristor to perform complex calculations in a single step so that they could then reprogram them “on the fly” for a completely different task. A single molecular memory could therefore perform the same arithmetic functions as thousands of transistors in a faster and more energy-efficient way.

The technology is likely to be used first in smartphones, sensors or other applications with limited energy supply such as edge computing. Before it is ready for the market, however, a wide range of questions need to be clarified, such as the behavior of memristor elements in nanometer-sized circuits.